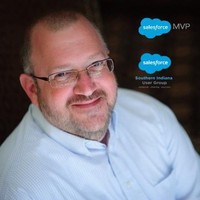 Eric has been in the Salesforce ecosystem since 2009. In 2010 he started the Southern Indiana Salesforce User Group. In 2011, he organized the very first Midwest Dreamin’, where 100 Salesforce enthusiasts descended upon Louisville for a full day of Salesforce community learning. Eric has been named a Salesforce MVP every year since 2013. He has spoken at Dreamforce in 2013, 2014, 2016 through 2018, and has organized a Dreamforce Breakfast for Newbies since 2012 as a fund raising event for Project Night Night. Eric has been Advocacy Manager at Apttus since January, 2016.

In addition to writing for Apttus and X-Author, Eric blogs personally at www.ericforcefield.wordpress.com. You can find him tweeting from one of four twitter accounts: personal; Southern Indiana Community Group; Midwest Dreamin’; and Dreamforce Newbie Breakfast. He’s also over the Salesforce Trailblazer Community.